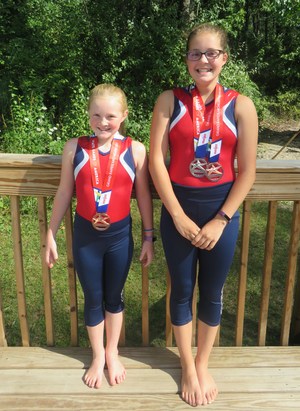 When Kenzee and Addy Knight talk about what they did this summer, they'll most certainly include their experience competing at the 2017 State Games of America in Grand Rapids. The girls not only competed but came home with their first State Games medals.
Kenzee, a fourth grader at Page Elementary School, earned a bronze in the balance beam for the junior division. Her older sister, Addy, a freshman at TKHS, brought home a silver in the beam in the senior division and a third place finish overall for her age group.
Both girls were also members of the Grand Rapids Xcel Gold team that won a first place team honor in their division.
"I was pretty excited and surprised," said Kenzee. "It was the first meet I competed at that level. I just learned the routines about a month before competition."
Addy said she was also pleased with her medal. "I was not expecting it at all," she said.
The girls, who compete regularly January through April, said the State Games offered a different kind of competition experience. Run like a mini-Olympic games, the State Games start off with the fanfare of an opening ceremony where the girls marched in with the Michigan team under the Michigan flag.
"It was really cool. It made me feel famous," said Kenzee.
Addy said the opening ceremony was something special and unique. "I felt really good and really proud to be there," she said.
This was the first time Grand Rapids hosted the State Games that brought athletes from across the country together to compete in more than 60 different sports - from archery to yoga and everything in between. In the gymnastics competition, there were more than 300 competitors.
In the gymnastics competition, the girls competed in four exercises: Vault, balance beam, uneven bars and floor exercise. And just like the Olympic games, their scores from each exercise are added together to determine the overall winners in each age division.
"I like floor exercise the best because I like to do the tumbling," said Kenzee.
Addy agreed that rotation is also her favorite. "I just like how you get to make up your own routine and have fun with it. And you just get to be more yourself."
They also agree on their least favorite - the vault. And agreed the beam might be the toughest.
"Just staying on the beam is hard, but it's fun," said Addy who wants to perfect a roundoff on the narrow balance beam.
Kenzee said she is working on a dizzying combination of a front handspring, front tuck, round off, back handspring, back tuck on the floor exercise.
The girls have both been in gymnastics for several years - Addy for five years and Kenzee for four years. Their mom, Jamie, said the girls have always been encouraged to try any sports or activities they want, but they keep coming back to tumbling and gymnastics.
They practice year round and their competition season begins in January continuing through April. During that time, they'll have eight meets per season around Michigan and neighboring states.
"They would go 24 hours a day if they could They are bouncing on the trampoline, then jump in the pool and do flips and handstands - and that's after they come home from practice. They are just always going," said Jamie.
Addy said she hopes to be able to continue her gymnastics career and would like to compete at the college level in a few years.
When the girls aren't busy flipping, tumbling and flying through the air, they keep busy with many other hobbies and activities. Addy loves to swim and hang out with friends. She plays clarinet in the high school band and is active in Girl Scouts and her church youth group.
Kenzee also loves swimming and being with friends. She's giving soccer a try this fall and already has her eyes set on playing trombone in the middle school band in a couple more years.
But both say they'll continue making time for gymnastics. "It's just a lot of fun. I love it," said Addy.
Kenzee couldn't sit still any longer and bounded off her chair to do some flips on the trampoline. "I just like it. It's fun and I like to try to do new things."