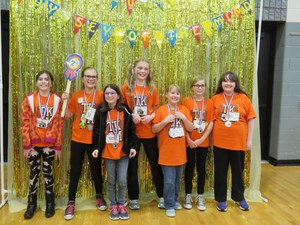 Thornapple Kellogg Schools will send three Odyssey of the Mind teams to the World Competition at Michigan State University in May including one of the teams from Page Elementary! One team from the high school, one from the middle school and one from elementary each earned the right to advance by getting a first or second rating at the state finals Saturday hosted at TK.

The middle school team of Courtney Haveman, Christel Hoskins, Kelly Gasser, Brendan Carlson, John Plummer, Michael Brown and Ellie Essenburg finished in a tie for third place in their division. Unfortunately, OM officials failed to recognize the team or give them their medals during the state finals awards ceremony. It wasn't until coaches Sheryl Haveman and Rebecca Hoskins looked at the scores and realized the error. OM officials recognized the error and will be sending medals to honor the team.

Thornapple Kellogg Schools hosted the state finals competition, bringing in hundreds of team members, coaches and visitors to the district.