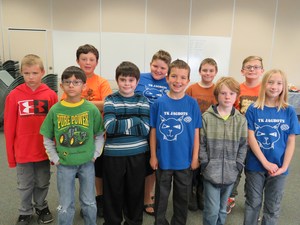 Two Thornapple Kellogg FIRST Lego Robotics teams are preparing for competition this weekend in Grandville. One of the teams is from Page Elementary and the other from the middle school.
Hundreds of students in grades kindergarten through eighth grade are expected to compete in the annual event that encourages students to apply science, technology, engineering, and math concepts (STEM), as well as use their imaginations to solve a problem. They also use team-building, presentation and creativity skills.

The challenge is really in three parts: Teams must design, build and program a LEGO robot that will compete in completing a series of missions; teams must also themselves research a real-world problem and come up with a solution, then make presentation to a panel of judges; and teams also must demonstrate the leagues' core values of friendly competition, and helping one another.

TK is sending one upper elementary team to the competition as well as one middle school team.

The challenges faced by First Lego Robotics teams change every year. This year's focus is called "Animal Allies" and teams were to research an issue concerning animals and come up with a solution.

The elementary team from Page, researched a problem about endangered black jaguars harming ranchers' livestock in parts of South America. Their solution - a sensor pad that releases smoke or loud sounds in random pattern to scare the jaguars away from the livestock.

The middle school team researched ideas for new inflatable saddle pads for horses.  Students pitch their "Air Riders" product in a skit based off the "Shark Tank" television series.

Winners at the Grandville regional level qualify to compete at the state level.

In 1998, FIRST Founder Dean Kamen and the owner of the LEGO Group Kjeld Kirk Kristiansen joined forces to create FIRST LEGO League and the competition for students. They believe FIRST Lego League inspires teams to research, build, and experiment, and by doing so, they live the entire process of creating ideas, solving problems, and overcoming obstacles, while gaining confidence in their abilities to positively use technology.

More than 28,000 teams in 80-plus countries are expected to compete this year in the competitions.