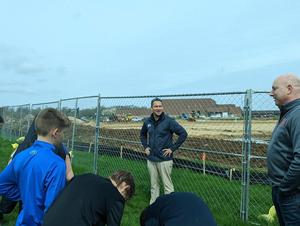 
With the excavators still moving dirt behind him, Dammen explained to students what was happening to the site as it is prepped for the future home of the new tennis courts. He explained that the equipment operators have to get specialized training and licenses to operate the machines and use the technology included.


“You see them moving a lot of dirt out here,” said Dammen. “It’s all to prepare for the tennis courts. Next week there will be concrete here. It takes a lot of work to get to the point where you see the end result,” he said.


He explained that his job as a director of field operations he provides leadership to project superintendents and serves as a mentor to new employees. Dammen, a TK alumni, worked as an intern for OAK for two summers, then after completing his construction management degree at Ferris State University, he was hired by OAK as a project superintendent and has been promoted to director of field operations.


Dammen said there are many different kinds of careers even within his own industry - from accounting, equipment operators, construction management, and marketing.  “There are a lot of career paths. It just depends on what you’re interested in,” he said.


He reminded students they’ve already seen some of the construction work OAK has done in their own building. “You guys have the new cafeteria and some new classrooms. You also got the air conditioning, which I know you are all going to like,” he said.


The tennis courts are just one project taking shape currently in the district. Just south of Page, Dammen reminded students of the new Learning Center being built. “You can see it taking shape from here,” he said, pointing over to the field where the construction is happening. “The roof is all in place now, so we can really start finishing up on the inside.”


He also outlined more projects to come. “This summer we will keep working on the learning center to be open this fall. There’s a lot of work to do there. At Lee, we’ll be putting on some new roof and at the middle school we will do some work on air conditioning and new flooring.”

Dammen also explained how he and others in construction use math, technology and communication skills every day on the job. For example, he said it’s important for heavy equipment operators to be able to calculate the weight of their vehicles and the loads they carry so they can comply with certain Michigan laws and regulations.

“An example - in Michigan we have something called frost laws. When those are in place, there are restrictions on weights that can travel over certain roads. So you have to be able to calculate the weight of your trucks and what you’re hauling,” he said. “There’s also a lot of technology being used in all the equipment and in the planning for the project.”

Reynolds said the construction going on right outside their windows gave him the perfect opportunity for students to learn more about careers in the industry and get a closer look of workers on actual job sites.