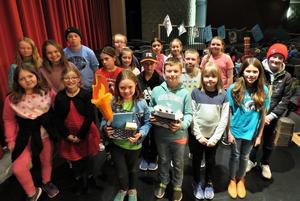 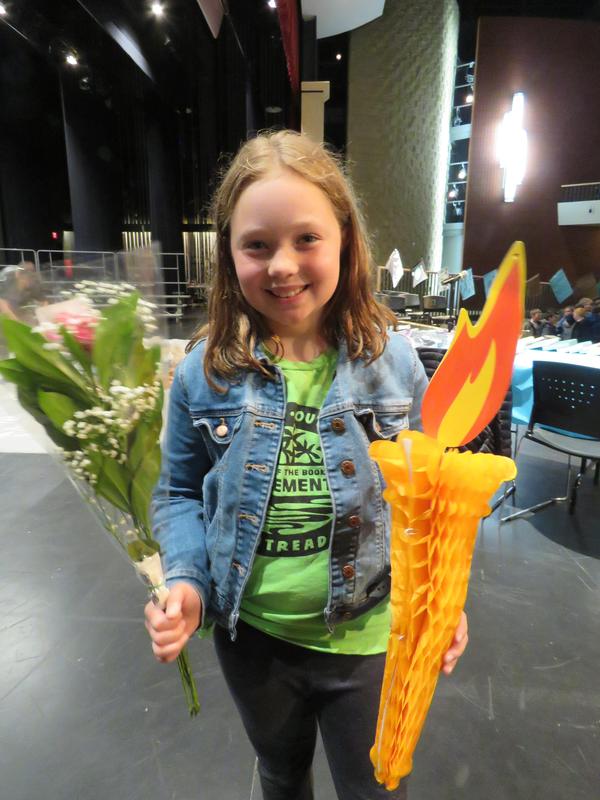 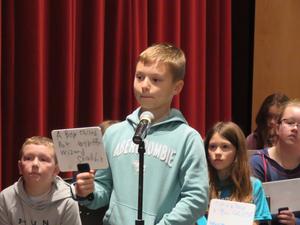 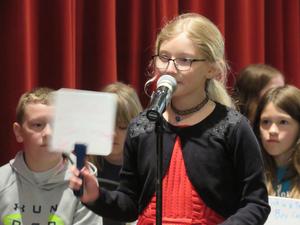 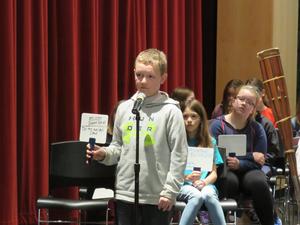 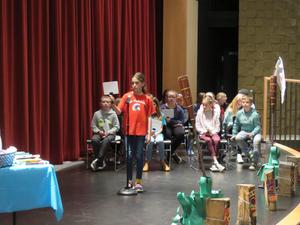 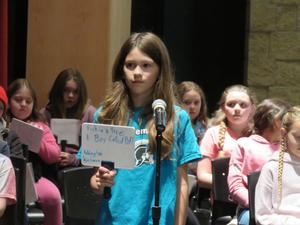 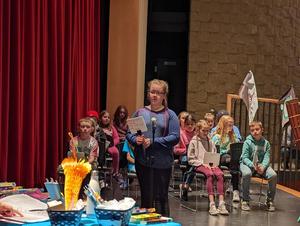 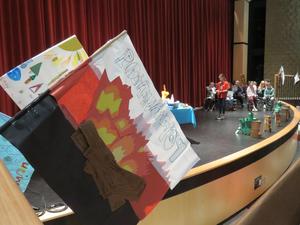 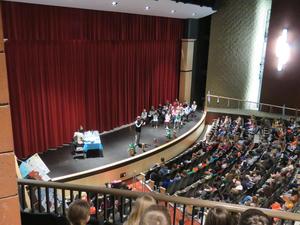 With dramatic “Survivor” music playing in the background, 18 Page Elementary classroom champions stepped up the microphone on the high school auditorium stage. In front of all their classmates and some family members, the contestants answered detailed questions about books they read.

“What animal was on James’ favorite Pajamas?” “What does Allie’s father do for a living?” “What kind of bird was drawn on the sail of the Ice Wizard’s ship?”

Question after question about specific books were answered correctly again and again. Eventually, after 13 rounds of questions, the field was narrowed to the final two. Shaddik Carpenter and Jolynn Fletke, both representing the fourth grade, took deep breaths as they prepared for even tougher questions in the final rounds.

Shaddik answered questions about two books - “A Boy Called Bat,” and “Ice Wizard.”  Jolynn answered questions from the books “Missing Mike,” and “Fish in a Tree.” After each round both finalists breathed a sigh of relief only to realize the battle was not over yet.

It took until the 17th round before Jolynn was crowned the Page Battle of the Books champion and Shaddik was the overall reserve champion.  Their classmates erupted in congratulatory applause.

The Battle of the Books is part of Page Elementary’s March Reading month festivities. This year, the challenge used the “Survivor” theme with each classroom decorating their own “tribe” flag and sending their classroom champion to Monday’s final school-wide battle.

Alison Muka, district literacy coach and reading interventionist, and Page teacher Nikki Witt, served as the judges for this year’s contest. After the battle was over, students were treated to another fun event when Page Principal Gregg Bruno fulfilled his pledge to students. He promised to have himself thrown into a pool of pudding if the students met their reading challenges of at least 500 books during reading month. As a school, students read 941 books to easily surpass the mark set.

McFall Principal Jon Washburn and Lee Principal Angie Jefferson had the honors of tossing their colleague into the pudding. Holding on to his hands and feet, they swung Bruno three times before tossing him into the pool filled with the butterscotch pudding mix. The liquidy pudding mix dripped from Bruno’s face, down his arms and soaked his clothes as he waved to students after the toss.

Battle of the Books has been going on at Page Elementary for more than 10 years.  Janis Fitzgerald, a parent volunteer and reading advocate, was instrumental in bringing the event to the school in a way she hoped would encourage and motivate students to read.  She helped pick out the battle books, read each one, wrote questions for each book and served as a judge for the contest.

Fitzgerald died in October 2021 after a 17-year battle with cancer. This was the first year she has missed Battle of the Books since COVID canceled the program for two years. Fitzgerald was remembered by students and Page Elementary staff during Kindness Week earlier this year, which also coincided with the kickoff for the Battle of the Books. Students had a penny war and donated more than $1,800 toward a sculpture in Fitzgerald’s memory. The sculpture will be placed in a permanent location in the village.