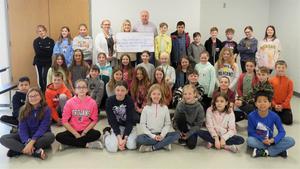 Battle of the Books is on again this year at Page Elementary, but without the guiding hand and thoughtful questions from the person who passionately introduced and organized the program at Page more than 10 years ago.

Janis Fitzgerald, as a volunteer and parent, had a strong conviction to encourage a love of reading. She not only organized the Battle of the Books every year at Page, but read every book included in the battles, picked up copies of  books, wrote questions and served as a judge. Janis died in October 2021 after a 17 year battle with cancer.


During Page Elementary’s Kindness Week, students had a penny war to raise funds for a sculpture that will be placed in Middleville honoring Janis and all the work she did for the schools and community. Not only did she help introduce Battle of the Books, she was also a strong volunteer in the Odyssey of the Mind program.


This week Page student council members presented a check for $1,812.46 to the sculpture fund through the Barry Community Foundation. Janis’ husband, Steve, emotionally accepted the check.


“This is amazing. Reading was one of her passions.  She hoped to instill that love of reading in all kids,” said Steve.


The penny wars were launched during the school’s kindness week activities. “It just sort of all came together with Kindness Week and we launched Battle of the Books at the same time. It was a great way to tie in all about being kind and the importance of helping others,” said Page student council co-advisor Stacy Sikkema.


“She (Janis) made this all possible. The students heard about her and how she read every book in Battle of the books. And they brought in a lot of change,” said student council co-advisor Jacki Schneider.

Robin Walters, another parent volunteer who worked alongside Janis for many years with the Battle of the Books, said she was impressed by the students. “It’s so touching to know that they are doing Battle of the Books again. She would be so glad. It’s an added blessing to know she will be remembered,” said Walters.

Students are reading all through the month of March. They are encouraged to read at least two books from the Battle of the Books reading list and then take part in a classroom contest answering questions about the books they read. Winners from each classroom move on to a schoolwide competition where one student from each grade level is crowned champion.

The sculpture will be located in downtown Middleville near the Paul Henry Thornapple Trail. With the school’s donation, fundraisers have met the goal of $4,500 for the sculpture.