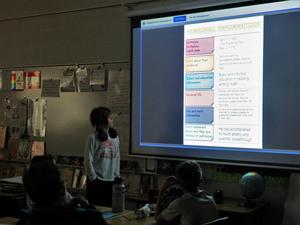 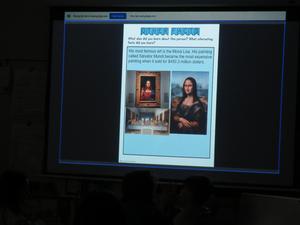 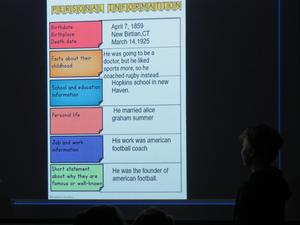 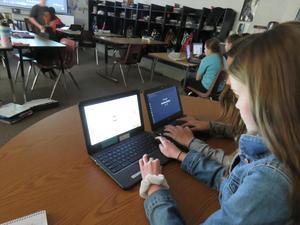 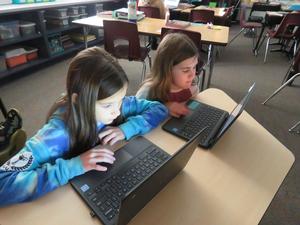 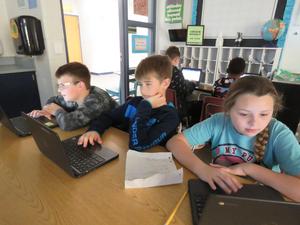 Did you know Leonardo da Vinci was left handed? Or that Walter Camp altered the rules of rugby to create the rules of today’s modern American football? Do you know who invented emojis or the game of volleyball?

Mrs. DeWitt’s fifth-graders at Page Elementary know the answers to all those questions and many more after completing a research and presentation project. Working independently or with a partner, students chose a person or topic they were curious about and wanted to learn more.


“We play football all the time so we wanted to find out who invented football and all the rules,” said Peyton Stratton who with his partner Caelob McCaulley made their presentation about Walter Camp - also known as the father of American football.


Micalan Villanueva opted for the famous artist Leonardo da Vinci. “It was a lot of fun. I learned about making presentations and finding information,” said Micalan Villanueva, who volunteered to be the first presenter.


Villanueva said a couple of interesting facts about da Vinci were that he was left handed and that he used to buy caged birds so he could set them free.


Through research, each presentation included personal information about their subject, a photo gallery of the person, a list of their accomplishments and struggles, and other fun facts. The presentations were set up on Google slides to share with classmates, both in the classroom and those quarantined at home.


“It was really interesting to find out how he (Camp) changed the rules from Rugby to make football and how he wrote a lot of books about the rules,” said McCaulley. “I never knew all that before.”


He and Stratton also  learned that using the line of scrimmage, use of downs, point system, the number of players per side, and the creation of the quarterback position all stemmed from Walter Camp’s influence. “You can find a lot of information about people, but sometimes the information wasn’t the same on different sites, so we had to try to check which one was right,” said Stratton.


Villanueva said there was more than enough information about da Vinci. “The hardest part was trying to decide what to use and what was most important,” he said.

McCaulley and Stratton said they were both a little nervous about getting up in front of all their classmates and sharing their work, but after seeing Villanueva make his presentation they knew they could do the same. “It just gave me a shot of confidence watching Micalan go first. Then I knew we could do it, too,” said Stratton.