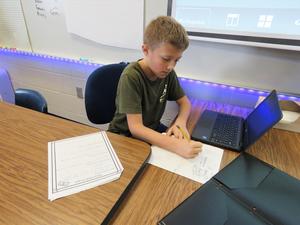 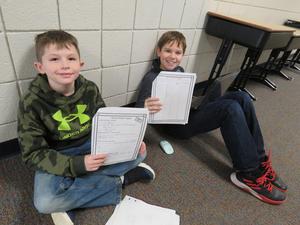 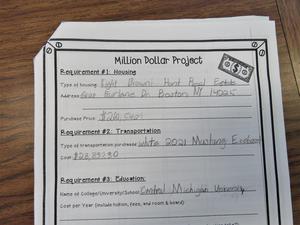 What would you buy if you won a million dollars? How much would you spend? Would you have enough for all your needs? Those are questions posed to Teresa Michalski’s fifth-grade students in a fun math project that gives them each a million dollars to spend – but there is a laundry list of required expenditures.

Boston Rairigh explained the process. “You have to plan how to spend the money. You have to buy a house and pay for some kind of transportation. You have to pay for college and you have to donate some of it to charity,” he said.

On paper, Rairigh bought a $221,000 home in New York, purchased a Mustang, and paid for four years of college. He still had nearly a page of other expenses.

“I would like to get an expensive dog, like a Husky or German Shepherd,” he said. “There are a lot of things to buy.”

“I’ve learned that things are a lot more expensive than I realized,” said classmate Tripp Helzer. “One million isn’t a lot when I saw some houses that were more than one million.”

Helzer bought a home in Ohio where he decided to attend college to become a veterinarian. “The house is the biggest part of it,” he said. “It’s more than $260,000.”

Logan Quillan opted to locate on the West Coast where his home in Pasadena, Calif. is nearly $423,000. Students researched prices and charities on different websites.

Quillan’s donation is more modest at $10,000 to Puppies Behind Bars – a program that trains prison inmates to raise service dogs for wounded war veterans and first responders, he explained.

Rairigh said he likes the activity because it gives him real practice in addition, subtraction and multiplication. He has to figure how much taxes he will have to pay on each of the items. When he’s finished, he has to calculate the percentage of his money he spent in different categories.

Quillan agreed. “It feels like a game you’re playing, but you’re really learning and practicing your math. I’m a lot better at multiplication after figuring out the taxes and stuff.”