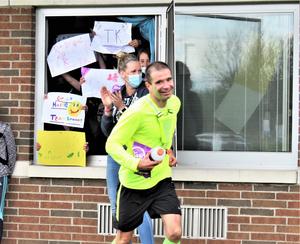 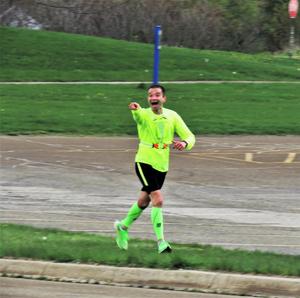 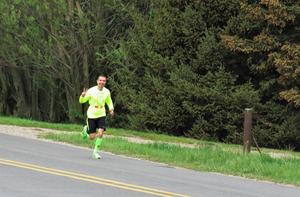 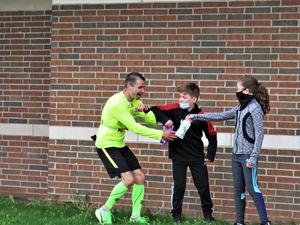 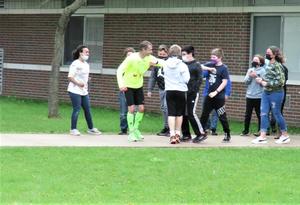 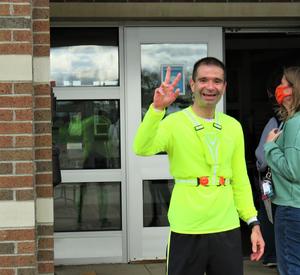 Page Elementary Principal Gregg Bruno laced up his running shoes, put on his yellow reflective vest and set out on a morning run Friday. It’s nothing unusual for the man who runs 4 to 8 miles daily during the week and 10 to 16 miles a day on weekends.

But his roughly 90 minute, 13-mile run Friday morning wasn’t just another run.  This run meant something special. He was running in honor of his fourth and fifth-grade students at Page who reached their goal of reading a collective 240,000 minutes in March. He promised students he would run to work one day if they met their goal and he kept his word.

"This year the Battle of the Books committee came up with a cool theme for March is Reading Month: The Amazing Race. The Run to School was their idea, but I was grateful to unite two of my passions; education and running. I'm so proud of our students' effort and so grateful for the amazing staff here that it was awesome to get to do it."

Shortly after 8 a.m. Friday, Bruno started out on a new route winding from his home through the country roads to Middleville. Using the Glympse app, teachers and students tracked and monitored Bruno’s progress seeing exactly where he was on his route.  They could even see how fast he was going.

When he got close to school, students grabbed signs of congratulation and clamored around their classroom windows. As Bruno ran by each window, he waved and gave a victory sign.

A few students stood outside to greet him with applause and elbow bumps as he jogged past. Two students offered him water and a snack as he came to a stop outside the front entrance where office and virtual school staff were waiting with their own signs and cheers.  Even virtual students logged in to a group chat joined in the fun offering congratulations for their principal who literally went the extra mile for them.