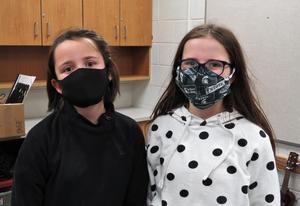 Sisters attending Page Elementary School practiced giving to others when they chose to write a grant to help Family Promise of Barry County and make sure the kids who stay there have outdoor play items. Their efforts paid off with a grant from the Youth Advisory Council of Barry Community Foundation to help homeless families in Barry County.

“We wrote it because other people aren’t as lucky as we are to have what we have. So we wanted to write the grant to get the kids some outdoor play stuff,” explained fifth-grader Karsyn Boersma.

Family Promise is a non-profit organization working with community partners to help homeless families stay together and get back on their feet to find permanent housing. Homelessness is a growing concern in many areas, including Barry County.

Younger sister Morgan – in fourth grade – said it’s a good way to help others. She said they got the idea from their Aunt Robin Walters who is a member of the Family Promise Board of Directors.   “She told us about it and so we wanted to help. So we wrote the grant together and we got it! And it’s going to help other kids so they can have things to play with outside,” said Morgan.

Both girls said they like school and indoor activities, but also like being able to play outside. Karsyn likes reading, writing, art, library and music in school. When she’s outside, she loves to swing and go sledding when there’s enough snow.

Morgan likes math and likes playing basketball outside. She also enjoys swimming.  “I’m really happy for the kids,” said Morgan.  “It would be sad not having anything to play with outside.”

Karsyn said she was excited when she learned the grant was approved and money would be used for things like outdoor games and equipment like soccer balls, basketballs and a basketball hoop. “All the older kids had to play some video games.  I think they’ll like being able to play outside sometimes,” said Karsyn.

Morgan said she realizes now how much fun it is to be able to give to others. Karsyn agreed. “I had always known but I hadn’t given that much before. It felt good,” she said.

In addition to writing the YAC grant, the girls also participated in a successful fundraising effort for Family Promise last summer called Night Without a Bed. The girls gathered pledges and camped out in a tent in their backyard to simulate what it would be like to be homeless and without the comfort of their own beds.

Vikki Boersma said she’s proud of her daughters and the efforts they’ve made. “No matter how old you are, if you take the time you can make a difference in someone else’s day.  I love that they had the chance to learn what it feels like to do something for someone else.’

For more information about Family Promise and how you can help, visit their website at www.familypromisebarrycounty.org.