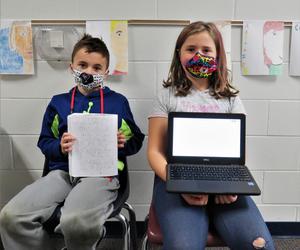 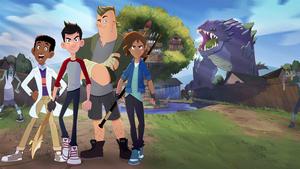 Brayden Wilcox and Khloey Hallifax didn’t jump up and head outside with their classmates when it was time for recess. Instead, the two Page Elementary fourth graders remained enthralled in listening to bestselling author Max Brallier provide writing tips. They wanted to soak up all the advice they could as young writers.

Brallier is a children’s book author and has written more than 30 books, including the New York Times bestselling series “The Last Kids on Earth.” The seven-book series has been made into a Netflix series. Brallier hosted an interactive Zoom meeting with students across the country on Oct. 20 in recognition of National Writing Day and sponsored by the National Council of Teachers of English.  Several Page fourth-grade classrooms participated.

“Are you a “pantser” or a “plotter”? asked Brallier during the conversation with students. He explained that “pantsers” write by the seat of their pants – figuring out the plot and story as they go. “Plotters,” on the other hand, have most of their story plot all laid out in their minds before they begin writing. Either way works, he said. It simply depends on an individual’s style.

He told students to start writing something simple and make sure they celebrate their completion.  He said students could even write “really badly” to get all their ideas down and have a completed, simple version of their story.  There is always plenty of time later to edit, polish and add details. Brallier said he works well when he sees accomplishments in his writing - like finishing a story even if it still requires much more work.

After talking with students, Brallier offered an inspiring writing prompt. “Think about a normal day and what that’s like and then think about something fantastic or spooky that happens. Describe it,” he said.

Brayden and Khloey put his advice to work and created their own short stories from his prompt. In “Craziest Year of My Life,” Brayden used his imagination to create a monster  -  part man, part cow center and 20 percent pig. “It’s about a kid who goes on an adventure to stop an evil king from sending monsters all over the Earth,” said Brayden describing his short story.

Khloey also used imagination and creativity to come up with her story, “Last Pets on Earth.” “It's about a dog and a cat in school and all the pets turn into zombies,” she said.

Both young writers said they learned a lot from Brallier’s discussion. “He said to surround yourself with things that inspire you,” said Khloey. “I have a bat (toy item) that’s from the “Last Kids” book and use it for inspiration.”

Brayden said he liked it when Brallier said he used his daydreams to help him think of ideas for possible stories and to find a quiet place to write where he wouldn’t be distracted. As a writer, Brallier said he  needs to block out the rest of the world and get lost in his own story and characters.

Brayden and Khloey said they both enjoy writing very much and hope to continue creating their own short stories. “It gives my mind something to do,” said Brayden. ,“Especially when it’s colder outside and friends aren’t outside to play with as much.”

Khloey said she hopes to someday become a writer and inspire students the same way Brallier used his expertise and success to inspire others.  “I want to make YouTube videos to help other kids write. I want to inspire them,” she said.