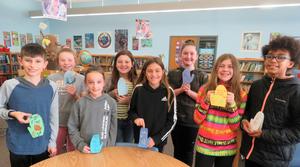 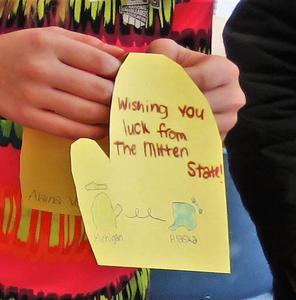 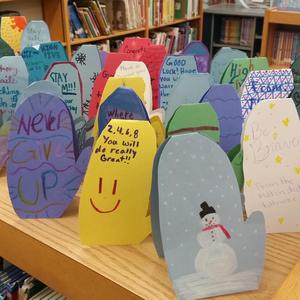 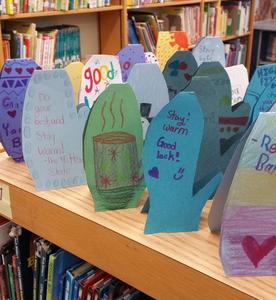 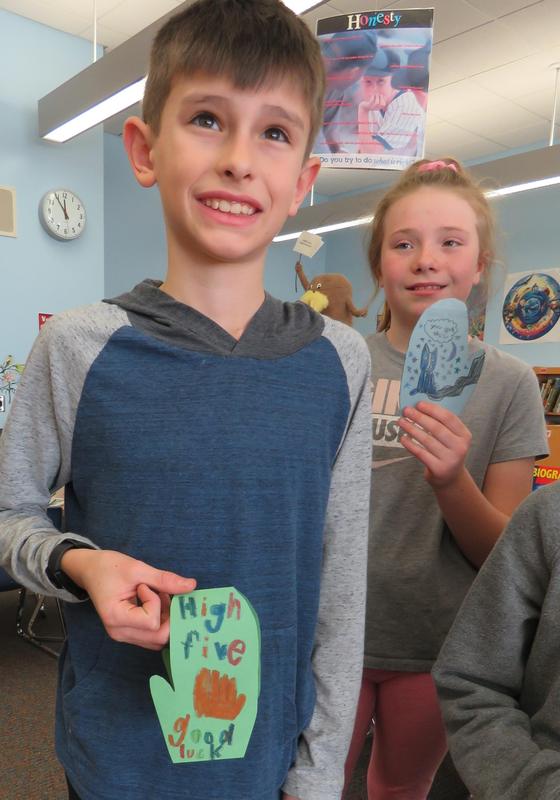 Before mushers and their dogsled teams start out on their nearly 1,000-mile Iditarod race through some of Alaska’s most brutal terrain, they’ll get some encouragement from Page Elementary students.

Page Librarian Diane Knight found a contest for students to create centerpieces for the musher banquet held March 5 – two days before the race starts. She submitted a simple concept design – a student-traced hand with well wishes from “The Mitten State.” Banquet officials selected it as one of the submissions for official decorations.

“I’m excited,” said Knight. “I think it’s neat that something from our school will be in Alaska to send the mushers off.”

Every student at Page was given the chance to create one of the centerpieces and Knight selected 70 to send to Alaska. The rest will be used as decorations at Page as students follow the iconic race. Knight helps students track the race teams and look at the terrain they are encountering. “There’s so much they can learn. We can talk about the weather, topography, the dogs and caring for them, equipment and sleds and just what it takes to prepare for a race like this. It’s fun to track the racers along the route,” she said.

Students said they are especially excited this year that something they made will be in Alaska and hopefully provide some hope and inspiration before the grueling race. “It’s a hard race. They have to have 16 dogs to pull the sleds,” said fifth-grader Addyson Lambert. “I added glitter to my (mitten cards). I want to encourage the mushers who are doing the race.”

Classmate Emma Koepnick has seen a dogsled race before in the Upper Peninsula. “All the dogs had booties on their paws to keep them warm and protected,” she said.

Naomi Feenstra-Amouzou, another fifth-grader, said she added a joke to her mitten. “I put the oldest joke on it – ‘Have a Doggone Good Time,’” she said. “Then on the back I put a sleeping husky.”

Many of the mittens included drawings of dogs and snowflakes. Some offered an outline of the state of Michigan along with the state of Alaska.  “It’s the Super Bowl of dogsled races,” said fifth-grader Jerin Donker. “It’s pretty cool that our mittens will be there.”

Sometimes referred to as the “Last Great Race” the first full-length Iditarod was run in 1973 and it took 20 days for the winner to complete. Today’s racers usually finish within 10-12 days depending on weather and terrain conditions. The race record was set in 2017 when it took the winning team just eight days to cross the finish line.

This year 58 teams, including one from the UP of Michigan, are signed up to run the nearly 1,000 miles from Anchorage to Nome. Most of the teams are from Alaska although there are also teams from Canada, Italy, Denmark and Norway. Michigan, Minnesota and Wisconsin are the only other states sending teams.

If all goes well, the race should take about 10 days to complete although the record is just eight days. Mushers and their teams of 16 dogs will start off from Anchorage March 7 in a ceremonial start. The race will actually begin in Willow the next day.

“I hope the cards make the mushers smile and encourages them to finish the race,” said fifth-grader Hayden Clement.

Many of the students said they are especially excited about following this year’s Iditarod since they feel a little connection to the race through the decorations.  “It’s cool they’ll see our mittens and our well wishes before they start the race,” said Clement. “It makes me feel good.”