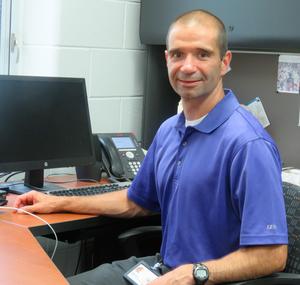 As a new principal at Page Elementary School, Gregg Bruno admits he still gets that “jittery feeling” the first day of school and is especially looking forward to starting his new role at Page. “I’m going to be present,” he said. “I hope to greet students every morning when they come to school. I’m going to be in the hallways and classrooms and lunch room as much as possible.”

Bruno is no stranger to being in schools. Prior to accepting the position at TK, he taught at Byron Center and then became the assistant principal and middle school athletic director. For the last seven years he has been principal at St. John Vianney Catholic School in Wyoming.

Through his years of service in education, Bruno said he knows it’s important to build relationships and build on what he says are all the wonderful things already happening at Page.

Bruno said he doesn’t need to reinvent anything at Page, but step back, understand how the building works, and find ways to enhance and improve what’s already there.

“Page has a fantastic staff. This is an incredible growing district that somehow still maintains that Norman Rockwell small town feel. I’m very excited to be here and looking forward to the start of the school year.”

He said he’s already seen the “tons of positive energy” and he’s looking forward to helping keep that energy alive and honor what’s being done before adding changes. He’s looking forward to listening to the teachers and staff and really understanding their needs as well as the needs of the students.

A quote from Theodore Roosevelt gives Bruno words to follow in his career; “People won’t care how much you know until they know how much you care.”